The contribution of Mendel to genetics is called Mendelism. Mendel is called the Father of Genetics. He was born in a peasant family in 1822 in Austria. In 1843, he entered the monastery at Brunn and in 1847 he was ordained as a Priest.

After completing the theological studies, he worked as a substitute teacher in Mathematics and Greek. In 1851 he was sent to the University of Vienna, where he studied science. Then he returned and worked as a teacher of physics and Natural Science. He passed the rest of his life as the Abbot. He died in 1884. Mendel was fond of Gardening from his boyhood. When he was working as a teacher, he performed a series of experiments with pea plants in the garden of the monastery. His work contains inheritance of characters in 22 varieties of garden peas. His papers were published in 1866 and 1867 in the proceedings of Natural History Society of Brunn.

What is Mendelian Law?

Each organism is formed of a bundle of characters and each is controlled by a pair of factors or genes (T or t). Each factor of the paired factors (Tt) is responsible for the expression of a particular variety (tall or dwarf) of a character (height). Mendelian law of dominance states that one factor in a pair may mask or prevent the expression of the other.

According to Mendelian law – Law of segregation, he proposed as “Each character is controlled by a pair of gene“. The original experiments by Gregor Mendel involved phenotypic traits (physical, observable characteristics) controlled by single genes.  The first one we’ll consider is seed color, which can be yellow or green.

The dominant allele, denoted Y, generates yellow peas in either the homozygous (YY) or heterozygous (Yy) state, whereas the recessive allele, denoted y, generates green peas only in the homozygous state (yy).  (In plants and flies, the dominant allele is denoted by a capitalized abbreviation and the recessive allele is denoted by a lower case abbreviation.)

Had it been lost during the cross? No, when the F1 is crossed with itself, both parental phenotypes were seen in the F2 progeny.  The effect of the recessive allele reappeared in the second cross, showing that it was still present in the F1 hybrids, but was having no effect.

Note that discrete phenotypes were obtained (yellow or green), not a continuum of phenotypes.  The genes are behaving as units, not as some continuous function.

The results can be explained by hypothesizing that each parent has two copies of the gene (i.e., two alleles) that segregate equally, one per gamete.  Since they are homozygous, each parent can form the only type of gamete (Y or y, respectively).

The two alleles did not alter one another when presenting together in the F1 generation because when F1 is crossed with F1, the two parental phenotypes are obtained in the F2 generation.

The ratio of 3:1 dominant: recessive observed in the F2 is expected for the equal segregation of the alleles from the F1(Y and y) and their random rejoining in the zygotes of the F2, producing the genotypes 1 YY, 2 Yy, and 1 yy.

Again the genes are behaving as discrete units. These precise mathematical ratios (3:1 for phenotypes in this cross, or 1:2:1 for the genotype) provide the evidence that genes, units of heredity, are determining the phenotypes observed.

Not all loci show the property of complete dominance illustrated by the Y locus in peas. Sometimes partial dominance is observed, in which an intermediate phenotype seen in a heterozygote.

An example is the pink color of snapdragons obtained when white and red are crossed.  However, the parental phenotypes reappear in the F2 generation, showing that the alleles were not altered in the heterozygote.

Sometimes co‑dominance is observed, in which both alleles contribute equally to the phenotype. An example is the ABO blood group locus.  Heterozygous have both the A and B form of the glycoprotein that is encoded by the different alleles of the gene.

In the third Mendelian law, This law is based on a dihybrid experiment. According to this law, the genes for each pair of characters separate independently from those of other characters during gamete formation.

Now that we have some understanding of the behavior of the different alleles of a single gene, let’s consider how two different genes behave during a cross.  Do they tend to stay together, or do they assort independently?

Re-stating the basic question, do the alleles at each locus always stay together (i.e. round with yellow, wrinkled with green) or do they appear in new combinations in the progeny? As expected from the 1st law, the F1 generation shows a uniform round yellow phenotype, since one dominant and one recessive allele was inherited from the parents.

The results can be explained by the alleles of each different gene assorting into gametes independently. For example, in the gametes from the F1 generation, R can assert with Y or y, and r can assert with Y or y, so that four types of gametes form: RY, Ry, rY, and ry.  These can rejoin randomly with other gametes from the F1 generation, producing the results in the grid shown in Fig. 1.2.  The alternative, that R always assorted with Y, etc. was not observed. 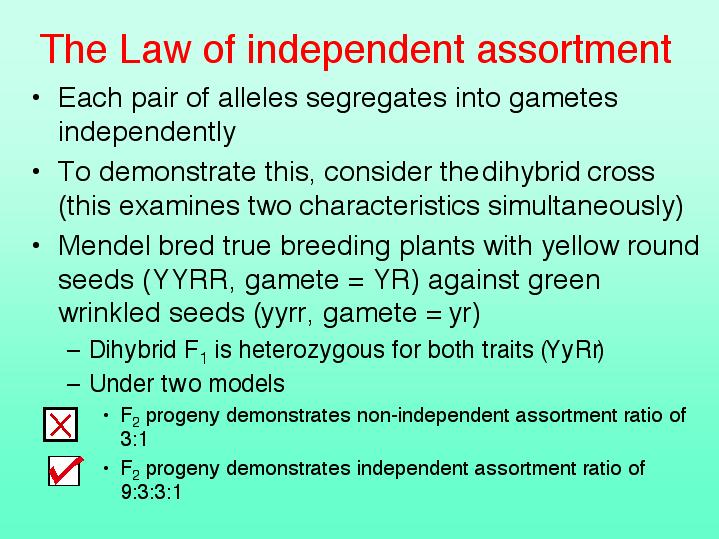 Again, the genes are behaving as units, and the gene for one trait (e.g. color) does not affect a gene for another trait (e.g. shape). Further breeding shows that many non-parental genotypes are present, some of which give a parental phenotype (e.g. RrYy).

These results are obtained for genes that are not linked on chromosomes.

This chapter covered What is Mendelian Law and Mendelism?. Here mentioned three Mendelian laws. They are Law of dominance, Law of Segregation and Law of independent assortment.